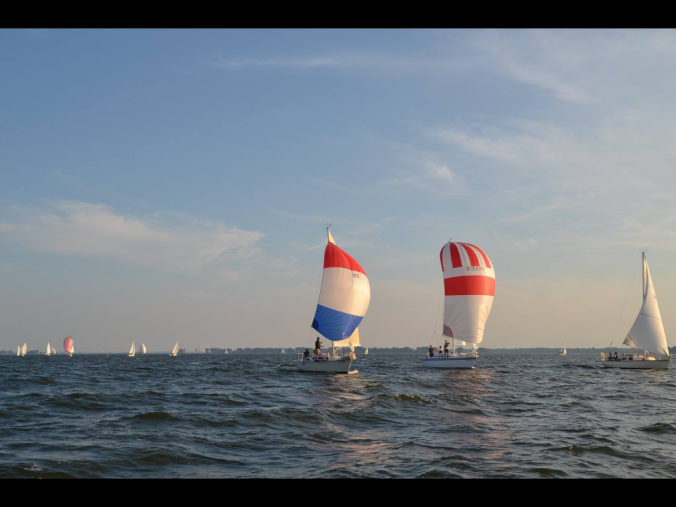 Last night was race night at the sailing club.

It was a windy evening and the waves were high. I am still rocking a bit as I type these lines.

I am an alternate racer when Paul’s regular crew can’t be there.

It is an unwritten rule that men do not race with their wives. The reasoning behind this is that the men get rather worked up and tend to do a lot of yelling and sailor talk. But I figured since I work with my husband I could handle that. So, in other words, I am used to functioning in that mode already. After the race, I was asked if I got yelled at a lot. I replied that I did not get yelled at but did the yelling. Lol. It is a well known fact that I am a lot more competitive than Paul.

After the race, the ladies put on a meal for the sailors. I was one of the very few women that joined the ranks of sailor.

To be honest with you, I would rather go on a leisurely cruise than race though. Racing is a lot of work. Everything happens very fast. At a moment’s notice you have to tack. This requires a lot of upper body strength to pull the lines as fast and as hard as you can. I can see why a lot of women who are older than me would have a hard time doing this. It is hard for me and I consider myself a strong woman.

Racing also requires getting out on the bow with the whisker pole. This pole holds open the sheets in opposite directions to catch the wind. It also looks like someone is out on the bow doing ballet (or pole dancing), which can be tricky when the surface is wet. After they are done with that dance, they should take a bow.

Sometimes racing requires fighting gravity to run from one side of the boat to another quickly over lines that are in the way. Last night I had to get up on the bow to untangle a line. It really is a bigger workout than you would think it would be. It took the wind out of me! All the while fighting off other sailors that are trying to steal your wind..

I took this picture at the boat races last year when I wasn’t racing. The class A sailors use their spinnakers which are the colorful sails at the front of the boat. We are not in class A. We did take 2nd place last night which wasn’t too bad since we botched our start. This weekend there is a full moon sailboat race. Sounds like an adventure to me!

There is no doubt that I will get roped into doing this again.