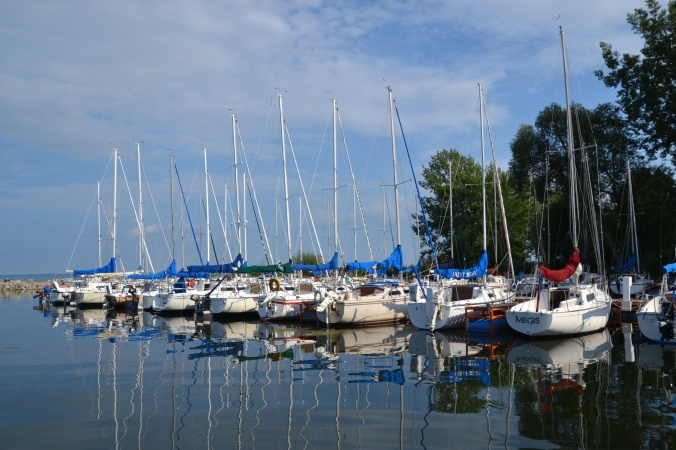 The sailboats are snuggling in their harbor slips deceptively calm before the start of the race.

On our actual anniversary date, I decided to join Paul as crew on his sailboat race. It is risky for a married couple to do, especially on their anniversary date. I was one of the few, if not only, wife out racing last night with her husband.

I have heard a lot of wives say that they can not race with their husbands. In the excitement of the event, the husband at times can raise his voice and speak harshly to his wife. I spoke to someone this weekend who said that she cried after her husband yelled during a race. They got into a big argument, and never raced together since.

I work with my husband, so…

Then there are the wives that don’t want to go sailing at all. There are a lot of reasons why. They are afraid of being on water and boats. Boating is the only mode of transportation that doesn’t terrify me. Another really good reason….they are afraid of spiders. Again, not me. I don’t even mind touching them. Or maybe, just maybe, they can’t stand their husband. Who knows? I love sailing. What is there not to love? Every time is a different adventure even if you go to the same place.

I prefer cruising over racing though. Can I let you in on a little secret?? There was more yelling during our anniversary cruise than on our anniversary race. Not to worry, it was nothing major. Paul accused me of not caring about him anymore. He is right. Sometimes I am uncaring. I lack patience. I lack empathy. I think that part of growing up in survival mode has made both of us lack empathy. We needed to have a thick skin and not care. But that is no excuse.

Sometimes I wish the honeymoon phase of marriage lasted a little bit longer. Maybe it would have if we didn’t have a newborn on our first anniversary. Who knows? It seems like those annoying quirks that I thought were cute at first didn’t stay cute for very long. Now we have a mutual annoyance for each other. Then add busyness and stress to the picture which tends to naturally give me less tolerance and makes me more critical.

It takes a lot of work to make a marriage great after being together over 20 years, but it is well worth the effort. We are trying to be more supportive, not take each other for granted, and take the time needed to make our relationship a priority. It is difficult because neither one of us has ever been shown this.

After the race, we celebrated our anniversary in a little dive bar. It was one of the few places that serves food after dark. Surprisingly, the food was great. We played a game of darts together and talked to another sailor that wandered in. He told us that he wished his wife would sail with him. Then we went home and decided to call it a year.