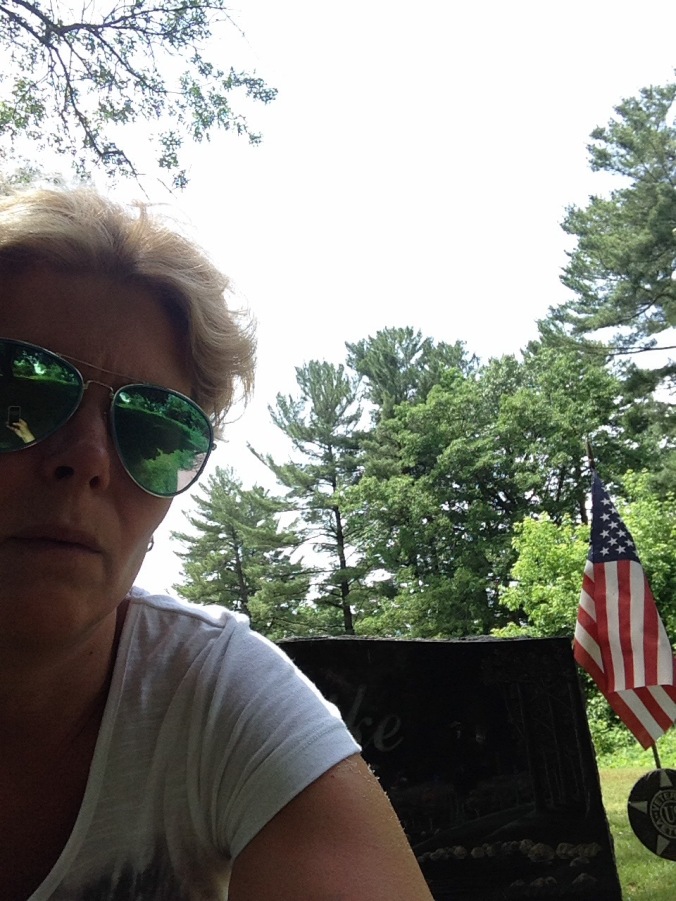 Over this past week, we have been hit by several severe storms. There was one day that it didn’t storm. Tornadoes blew through the area.

My daughter, Arabella, was at camp all week. They had to take shelter several times due to the severe storms. For once, I didn’t worry too much. I grew up fairly close to the area that my daughter went to camp. I knew exactly where the storms hit. I knew the campers weren’t in the storms path. By the time I knew a storm was coming, it had already passed that area.

After I picked up my daughter from camp, I went to the cemetery to see if my grandparents ‘survived’ the storm. I checked on their parents and siblings too. It seemed like a strange thing to do, since they all have been dead for almost a decade or more. I don’t get out that way to visit too often.

I remember going as a child along with my grandma and Aunt Grace to check on our family at the cemetery after a storm. Now, regrettably, it felt like my turn.

I drove by my grandparents house. The new owners put up a decorative fence in the front yard. At Aunt Grace’s house, the new owners put in a new front door and constructed a flower bed where a tree used to be. It is still painful to drive by.

I stopped at my parents house, but they weren’t home. It was oddly silent. I feel a certain sadness when I go home. I can’t explain it. I feel nostalgia for what was. I feel grief for things that happened that shouldn’t have. I feel an emptiness, a sense of being alone. It is a painful feeling, but ever so slightly, an uneasiness that almost cannot be pinpointed.

I picked asparagus in my parents backyard as I saw lightening and heard the rumble of distant thunder. I felt empty, alone, and a little afraid. Afraid of being vulnerable out in the open. I felt the emptiness of it all. Soon my parents will be gone. I still regret not spending every moment with my loved ones that I could before they were gone. Guilt. But not even deserved. I spent a lot of time with my family. My mother didn’t want to let me go, so I stayed. I’m the dutiful firstborn that never went far from home. I was needed.

As I ventured out and about this week, I talked to others that faced the storm. People are drawn to tales of destruction, to view the carnage. People want to share their survival stories. I spoke to a stranger that said his family had several collector cars that were destroyed by the tornado after the shed they were in blew away. Cars that were loved, the original parts sought after. I saw pictures. How often does a stranger show you picture after picture on their phone??

I heard the story of a barn the was destroyed in the storm. The cows were lost and some blew away. Half of the cows were found down the road impaled into the ground. These are survival stories being told by people grasping for others who can relate.

I thought about the stories I heard, then realized that I am the same way. I want to tell my story. I want to feel united in life’s collective struggle. They may not be the same stories, but have the common key of surviving something difficult.

I told you this week about a couple of stories where we survived sailing under difficult circumstances that were unexpected. I tell you about my races, how grueling the last triathlon and marathon were. My struggles as a parent, spouse, business owner, and with my own personal issues. I speak of surviving a very difficult childhood. I often feel alone because I don’t hear a lot of people with a similar story.

Who else out there has a severely mentally ill sibling that threatened to kill the youngest most vulnerable family members? Beside my siblings, I know of no other person who has that story to tell. It is lonely struggling alone.

My favorite bloggers are those that have struggled too. I don’t read your stories because I like to see you in pain or your failure. Your stories motivate me to go the extra mile. They inspire me to keep telling my story.

I almost feel sorry for people that don’t have a story to tell.