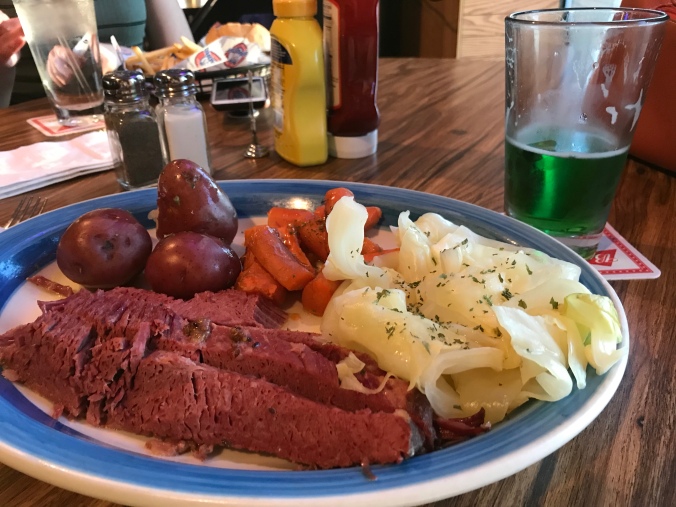 Yes, I am Irish. I even know the name of my ancestors that came over from Ireland.

I love corned beef and cabbage, but apparently that is not how the Irish celebrate the holiday according to some WP friends that live there. I even heard that St. Patrick is not a real saint. But I am not here to talk about Irish culture because I haven’t a clue. I know how the people in Wisconsin celebrate. Most people wear green and get drunk. Kind of like a Packer game, but in March. Except this year St. Patrick’s Day fell on a Saturday calling out every drunk, moderate, and light drinker.

I saw something on Facebook the other day about state motto’s. Ours was something like, ‘It’s too cold to be sober’. Here I sit on the first day of spring and our high temps are not going to be above the freezing point.

This year my friend Lisa was in town for St. Patrick’s Day. Our mutual friend Cori invited me out. I kind of had a hankering for corned beef and cabbage with green beer, so I said yes. We haven’t had the chance to get together for 6 months since Lisa moved away. Apparently, Cori and Lisa started celebrating before going out. Then Lisa said she had a tall margarita on the ride there.

Cori told the waitress that when she saw her finger up she was supposed to bring over 2 beers. It seemed like her finger was up about every 15 minutes. Cori told me that she was worried about her adult son. He drinks too much and has blackouts.

The one thing I respect about Cori is that she never drives drunk. She has been bringing her daughter out with her since she got her driver’s license. This is where I have the moral dilemma. Cori told me this past weekend that she created several fake ID’s to get her daughter into bars. Her daughter doesn’t drink. She drives people home that should never get behind the wheel of a car.

I am torn. I am totally against the whole fake ID thing, having someone in high school hang out at bars…What kind of example is that?? But I am for a safe ride home. It’s not like an Uber is easy to get.

I didn’t stay out late that night. I left before things got too crazy. There was a creepy older man dressed in black that kept coming around checking out the women on the dance floor. A woman tapped my arm and said, “You are beautiful” three times. She was young and had green hair. A wig? For a fleeting moment, I felt happy to hear the words spoken by a stranger that were never spoken by my father. I want to be beautiful forever. I grip onto her words vainly as time slips them back through my fingers. I am afraid to get old. The creepy man’s finger nail scratches my back as he steals by.

As I was leaving the parking lot, I saw the creepy old man leave with the nice girl with green hair. Did they arrive together? I feel sad. Is this her life? Why didn’t I say something kind back?

Late the next morning, I had some errands to run with my daughter. Less than a mile from home, we almost got hit by a drunk driver…probably still drunk from the night before. She swerved from the ditch into our lane…slowly weaving in and out as we pulled aside and watched her parade through.

That is St. Patrick’s Day in Wisconsin.