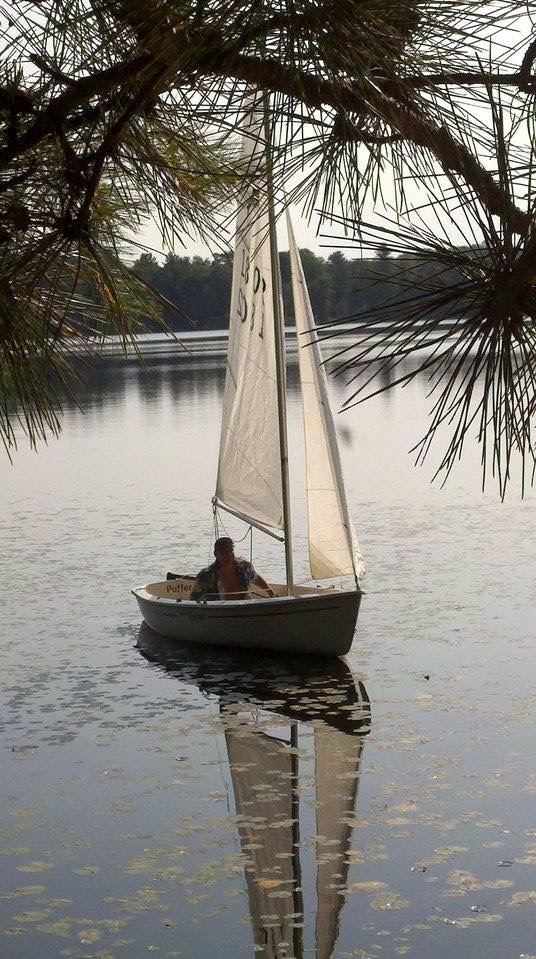 A couple of years back, Paul wanted to learn more about sailing. He signed up for a beginner’s sailing class. At the end of the class, the instructor suggested that the students buy a small sailboat to practice sailing. That is exactly what Paul did. He bought a 1960’s model 12 ft Puffer, complete with retro life jackets.

At the time, the sailboat seemed big. We took this boat up north and learned everything that we could on it. Since we bought a sailboat twice the size the following year, this boat looks so tiny. Now we keep this sailboat up north year round.

There were a few things that happened up north with the sailboat that were a little scary at the time. Now it makes for a humorous story.

We were up north for an unseasonably warm weekend in late September when Paul and Arabella decided to go for a sail. My mom was the one that alerted me of danger. A wind gust caught the small boat and tipped it over. Paul and Arabella were treading in cool deep water.

I couldn’t see them because the boat was blocking my view of them at first. I was worried that Paul got knocked out somehow. I feared that they were drowning or freezing to death. I tend to go through all of the worst case scenarios in my head.

Paul said that they seemed to fall in slow motion. The biggest danger that they faced was losing the center board which he later secured.

I sent Angel and Alex out on a rescue mission in a paddle boat. I know what you are thinking. Really, a paddle boat?? Did that take a couple of months, or what? We didn’t have any other boats to send out.

Meanwhile, under the stress of the rescue mission, Angel and Alex started fighting. I watched as my oldest two children started yelling, screaming, and swearing at each other over who had control of the paddle boat. The fighting escalated into pushing and shoving. Next thing I know, Angel was pushed overboard. Eventually, Angel and Arabella swam to shore and walked back to the cabin. I am glad we made sure that all of our kids are strong swimmers.

Paul and Alex struggled to bring the wayward boat back to shore. No lasting damage was done.

Too bad I didn’t get any pictures of that!