A couple of weeks back the doubting Thomas in me asked for a sign…and God delivered..

The story really starts a few days after my doubting post. Paul flew out of a small town airport after visiting with our daughter Angel. He had two connecting flights from there to get to his destination. Each layover was an hour long. He almost missed his second flight. The third flight was considerably delayed due to bad weather from a hurricane.

Paul was in much thought and prayer about this trip. He was going to a business meeting that would require making a decision that he was unsure about…one that could have a big impact on our future. After the third flight was delayed, Paul sat down at the airport bar and struck a conversation with the man sitting next to him. The man started talking about recently being faced with the same decision that Paul was contemplating. Unbeknownst to the stranger, he was an answer to prayer.

Paul did not think that the meeting with the stranger in the airport was a coincidence. He decided to take the fork in the road. I really can’t go into the details at this point…but I can say that having an answer has been freeing…a burden lifted.

I only have 3 1/2 years of parenting left. Then I only have to be responsible for me.

I feel like a caged bird that has been set free. It’s not that I will leave my cage, but that I can. I will no longer be trapped. For the first time I feel like I can fly unfettered. I never thought that this would be possible.

I kept thinking over the past few weeks that if God can take care of the birds, why can’t He take care of me??

Maybe I am asking too much, but please give me a sign…I’m worried that I have to do this whole life thing alone..

But I still didn’t get the message until I turned to the last few pages of the bulletin. There was a picture of a bird with a message that said something like…listen and you will hear God speaking.. 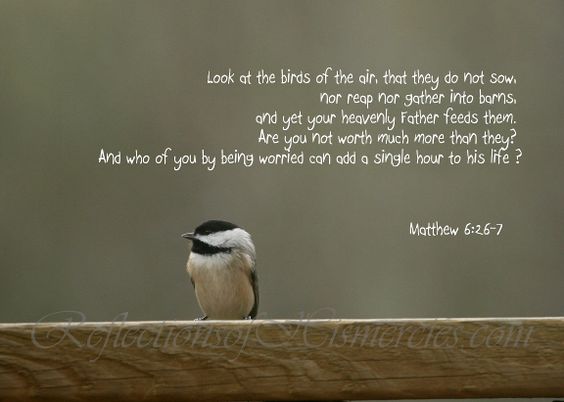 I finally saw the sign…God does care about me. I might not know where He is leading, but I know that I won’t be traveling alone.